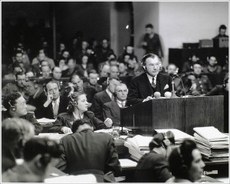 Jackson at Nuremburg Trial
Conclusion - In addition to the Common Core connections offered in Step Five, this lesson is also an exercise in self-esteem building and transition planning.  A teacher can use this information to formulate an Individualized Education Plan (IEP).  An integrated lesson like this could also become part of a student portfolio.

"We didn't start the fire" by Billy Joel

The teacher can research other time periods and the major characters used in the video adaptation.  The teacher can assign a year or decade to a student or groups of students for further research.  The QR code for the video website is available in this section or the direct link below:

"We Didn't Start the Fire" The History Behind Billy Joel's Song

That Man: An insider's portrait of Franklin d. Roosevelt

High school students can read about Franklin Delano Roosevelt in Robert H. Jackson's book, That Man: An Insider's Portrait of Franklin D. Roosevelt, edited by John Q. Barrett.  The teacher may use excerpts from this book or read the entire book.  Below is an excerpt from the book jacket:
"Written with skill and grace, this is truly a unique account of the personality, conduct, greatness of character, and common humanity of "that man in the White House," as outraged conservatives called FDR. Jackson simply but eloquently provides an insider's view of Roosevelt's presidency, including such crucial events as FDR's Court-packing plan, his battles with corporate America, his decision to seek a third term, and his bold move to aid Britain in 1940 with American destroyers. He also offers an intimate personal portrait of Roosevelt--on fishing trips, in late-night poker games, or approving legislation  while eating breakfast in bed, where he routinely began his workday. We meet a  president who is far-sighted but nimble in attacking the problems at hand; principled but flexible; charismatic and popular but unafraid to pick fights, take stands, and when necessary, make enemies." 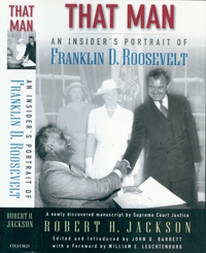 Robert H. Jackson shaking President Franklin D. Roosevelt's hand. In the background, Robert's wife and daughter look on. Please click on the book to learn more about John Q. Barrett and this amazing piece of history.

"This biography about Robert H. Jackson (1892–1954)--the first published in fifty years--tells the fascinating story of an extraordinary man who rose from a childhood in rural western New York to President Franklin D. Roosevelt’s New Deal inner circle during the Great Depression; to the position of attorney general while the nation prepared for World War II; to the Supreme Court bench when it ruled on such significant cases as Brown v. Board of Education of Topeka; and to chief U.S. prosecutor at the Nuremberg Trial. Despite his remarkable accomplishments, Jackson never attended college or earned a law degree. Quotations from Jackson's personal letters, unpublished autobiography, and oral history bring to life some of the most momentous events of the twentieth century. Illustrated with 100 photographs." - excerpt from www.roberthjackson.org 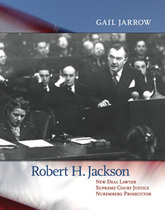 Research is organized into the following headings on the Robert H. Jackson website:

Excerpted from the Robert H. Jackson website:
"As the Supreme Court recessed for the summer on June 2, 1941, Chief Justice Charles Evans Hughes announced his intention to retire.  On June 12th, President Roosevelt nominated Associate Justice Harlan Fiske Stone to succeed Hughes as Chief Justice of the United States and Attorney General Jackson to succeed Stone as Associate Justice.  Jackson's nomination was confirmed by the Senate on July 7, 1941.  On July 11, Jackson took the judicial oath at the White House and received his commission as an Associate Justice of the Supreme Court."
The teacher can have the students research court cases and decisions made by Robert H. Jackson.  The Jackson Center website has a comprehensive listing of all of Justice Jackson's court cases from October Term of 1941 to the October Term of 1953.

"From his days in high school to his time on the Supreme Court, Robert H. Jackson was considered by many to be an amazing orator and writer. His speeches and works have been heard by many, and to this day are considered to be very influential and important in discussions of Constitutional law, international law, legal history, and Supreme Court history. The Jackson Center has many of these articles and speeches in their collection, and thus many of these can be
viewed directly on their website.  Here you will find many of Jackson's key works during his time as a student, lawyer, public servant, Supreme Court Justice, and Nuremberg Prosecutor." - excerpt from www.roberthjackson.org

The Robert H. Jackson website contains a vast collection of Nuremburg Trial videos for use in a classroom.  Here is a small excerpt: "On May 2, 1945, President Harry S. Truman appointed Associate Supreme Court Justice Robert H. Jackson as chief prosecutor for the United States in the proposed trials of Nazi war criminals. President Truman gave Justice Jackson free rein to choose his own staff and to design and implement the trials. It was to be a truly international trial, the first one of its kind." - www.roberthjackson.org
Essential Questions:  What did Robert H. Jackson want to achieve with this trial?  Who were the "major players" from this time period?  What occurred during the downfall of Nazism?  What was the Holocaust?  How did Robert H. Jackson's decisions during the Nuremburg Trials impact the way in which crimes against humanity are prosecuted today?

The Robert H. Jackson Center has an extensive collection of archives.  Material contained within these sites is primary source, with photos, audio and videos coming directly from the time period in which Robert Jackson was alive and practicing law, or from notable persons who have visited the Jackson Center in Jamestown, New York, USA.  The resources are an invaluable tool for educators to use while formulating lesson plans in cross-curricular areas.