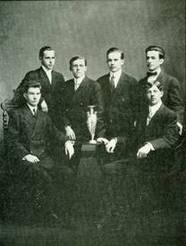 Jackson & debate team, 1910.
FIVE MINUTES
After the video adaptation of Billy Joel's "We Didn't Start the Fire", the teacher will hand out one of the poems below to read aloud with students. Please note that a handout link is available for each.  Video presentation of each poem is also available at the bottom of this page.


This is a three-tier lesson with a poem listed for the following grade levels:

Middle School - "It Couldn't Be Done" by Edgar Albert Guest

High School - "The Road Not Taken" by Robert Frost

Each teacher can choose which poem best fits their age group and student learning styles.